A reliable system is a critical factor in maintaining quality and customer trust. Thus, PT Berri Indosari, the country’s leading beverages company, trusts SAP Business One for its IT solution and integrated system.

With over two decades of experience in the beverages industry, PT Berri Indosari is the best fruit juice producer in the country. It is not easy to build a long-term company, especially to maintain product quality to always be the best in the market.

Janny Halim, General Manager of PT Berri Indosari, explains that besides offering a wide range of flavors, Juice United also offers custom made product based on customer request. Currently, one of the most favorite flavors is apple, orange, guava, and mango. “We do product development continuously to meet with customers’ needs,” Janny Halim says.

Customer trust is the most valuable asset. This is why PT Berri Indosari focuses on maintaining customer’s trust and loyalty.

And as the company grows bigger, it has to face bigger challenge as well. Now, the company that was established in 1995 has to maintain a huge and continuous supply to the market while maintaining quality excellence. Thus, PT Berri Indosari sees that it should also improve its management process like sales procedure and supply assurance aside from improving manufacturing process.

To facilitate the company's business process that gets more complex, PT Berri Indosari expand their business by opening up branch offices. Now, PT Berri Indosari has offices in three major cities in Indonesia: in Bandung, Surabaya, and Denpasar. And there is also a possibility that the number of branches will grow further.

Align with the company progress, in 2014 PT Berri Indosari also improve its business process support system. At the time the previous support system was considered in capable to accommodate the company's growing needs. Through a series of studies and evaluations, PT Berri Indosari decided to apply a more updated and reliable system, especially since the previous system often troubled.

“With the previous system we have difficulties in tracing inputs and transactions,” Janny Halim says.

Aside from traceability problem, production and distribution management was also affected. Whereas a reliable system on the two is critical since both are PT Berri Indosari’s main business process.

The third issue is integration problem. Janny Halim says that the previous system was not integrated. Each division was not connected to each other. “Due to all the problem, we decided to look for a better system that could accommodate all our needs,” Janny Halim says.

Besides already trusted by many companies, SAP Business One is already well known world-class business enabler.

PT SOLTIUS Indonesia (SOLTIUS) which is part of the Metrodata Group as who was appointed to be the company’s implementation partner, immediately respond PT Berri Indosari needs.

SOLTIUS, Janny Halim explains, was chosen based on several considerations by PT Berri Indosari board. SOLTIUS has a different approach in assuring the implementation success compared to other vendors.

Janny remembers when SOLTIUS visit to PT Berri Indosari for SAP Business One presentation, the company not only sent its sales representative but also member of the board of directors. This showed that SOLTIUS is serious in its job and a reliable partner.

“There were lots of vendors that offered us SAP, but their sales representative couldn’t explain well of their services, while I needed to have a deep discussion to understand the work procedure. In this part, SOLTIUS convinced me,” says Janny Halim.

The installation process went relatively smooth. Full support received from the top management was a crucial factor that contributed to the success.

Janny Halim describes that almost all of the challenges during the implementation process was well addressed, including the ones that relates with user/human resources.

Janny Halim remembers that during the early stages of the implementation they were having difficulties to adapt with the new system. This is a very reasonable issue since the new system is completely different with the one the company used.

“Even after several months the SAP Business One went live some people was caught using the old system,” says Janny Halim. This issue was addressed by providing training and time for adaptation process.

After officially go live in December 2014, SAP Business One began to bring improvement to the company. The issues previously felt is no longer being found.

“With SAP Business One we have a traceability function. With the previous system we cannot trace who caused a problem, which is now can be traced with the SAP Business One. For example, we can find out if Bali office has completed their report or knowing if someone failed to complete their task on time. This makes monitoring more effective,” says Janny Halim.

Luki Bunadi, Accounting Manager PT Berri Indosari, gives similar statement. As the company’s Accounting Manager, Luki is the person who deals with the SAP system mostly and he feels that SAP Business One has many advantages compared to others.

“SAP Business One Loading process is really fast, it took seconds to withdraw over the past year data’s. The speed is far compared to our previous system,” says Luki.

Aside the speed, Luki says SAP also offers Relation Map features that enable the company to track transaction. “Each time we want to know the history of an invoice we could just retrieve the data from the Relation Map. Each history can be tracked from the beginning till the end. This make it better from our previous system,” says Luki.

“From the beginning SOLTIUS has given us a good impression and very communicative. They understand well what we needed and willing to hear what we say. And they give us what we needed. When we meet obstacles, it is easy to contact them and get the solution,” Janny Halim says 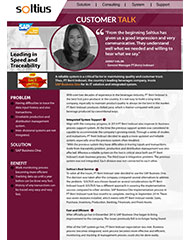