Growing Faster with SAP Business One

SAP brought a different perspective to PT Culletprima Setia in growing its business.

Since it started its business in 1992, PT Culletprima Setia has one objective of being the best in business. With strong motivation and long good reputation, the company is among the best in glassware industry. The company’s brand: BBC Glass, is consumers’ favorite brand.

Demand on BBC Glass’ cup, plate, and bowl continue to increase from time to time. It requires the company to expand its business from one factory into two production facilities capable of producing 200 tonnes of daily output of cups, plates, and bowls.

One of the main selling points of BBC Glass products is its uniqueness brought in the rich colors available for each glassware series. Currently BBC Glass holds 80 percent market share in colored glassware in the market.

Aside from its uniqueness, BBC Glass also offers high quality glassware yet environmentally friendly. The raw material is sourced from recycled glassware but processed with high-tech manufacturing machine under a tight quality control to ensure the perfection of each product.

The company management still aims higher, it plans to add another factory to grow production capacity. The new plant will be built next to the two existing factory at Kawasan Industri Pasir Jaya, Jatake, Tangerang.

One of the main factors behind the expansion is the company’s supporting system brought by SAP Business One.

Compared to other big companies using SAP to support their business, PT Culletprima Setia is a new player. With 25 years of reputation, the company has just been introduced with the SAP in the past year and a half. But, the company’s management had taken a brave step and uses a different perspective to grow its business further.

“We were using customized system of inventory and delivery notes. The system printed out delivery notes to deliver the stock to its destination. The letter also became the basis to create invoice. All notes were taken manually to create a balance,” says Ardiyanto.

But since the company have used the customized system from the start, it was not expecting more, there was seems to be no problem. Although, it should be admitted that the management has to get into hassle when inputting the data’s or when checking the inventory and production. Even they often made late collection because the system provides no warning.

In 2015, PT Culletprima Setia had the initiative to grow the company further. Doors were open for investors or joint partners. Several partnerships were done and there were no significant problem to reach agreement.

The first step taken by the new investor was implementing the SAP to support business process in the company. PT Soltius was contacted to implement the SAP Business One as soon as possible.

The implementation process was quite fast, which was done in four months. The first three months was used for designing, system implementation, and user training. The next month is used for SAP Business One to go live with assistance from PT Soltius.

With the new investor, the fist step taken was implementing a good system to revive the company. Not in a sense that PT Culletprima Setia that in a crisis condition, but because there was no reliable system that could describe the company's actual condition.

Ardiyanto says the weakness of the previous system is that it is not integrated. Inventory input was done manually, as well as production data. Even the system didn't provide the module for production.

The leaks become visible with the SAP Business One. Using the previous system, purchasing process was done inappropriately because there was no system that supports it. Even though the purchasing was done according with the procedure by filling forms, but the forms become untraceable inside the filling map. When checking a certain order, the data’s must be retrieved manually from the sales, invoice, to accounting. This had become the company’s routine, troublesome and inaccurate.

The first changes immediately felt by PT Culletprim Setia after shifting to SAP Business One was that production control becomes more comprehensive from end-to-end, from procurement, purchasing, goods order, and production matching the demand. In other word, the SAP Business One supports all the divisions, from Warehouse, Production, to Sales.

“We’re like a frog under a coconut shell, we realized the weakness after experiencing using a better system,” says Ardiyanto.

“The investor knows the company’s weakness, that is having the system that can’t control all. As an investor, there surely want to know how their money is used and they saw that the system cannot accommodate it. So they suggest us to use the SAP Business One,” Ardiyanto says.

SAP, Top of the Class ERP

From the user side, the company that currently has around 700 employees didn’t face significant problem in the implementation of the SAP Business One. Ardiyanto says he didn’t receive any complaints from user during implementation and after go live.

Its just not all users quickly adapts with the SAP Business One. The company did an assessment to figure why. Ardiyanto says that he never try using other system, to him the SAP Business One is user friendly. He sees the problem a natural since every user will face a learning curve when dealing with new system.

PT Culletprima Setia is consisted of several divisions: Production, Warehouse, Purchasing, Marketing, and IT. The benefit of using SAP Business One is felt in each division. In the marketing divisions, the SAP Business One is relied to check stock and sales. In the production, the inventory can be more efficient and better coordinate with the purchasing. For the investor, the annual report becomes more reliable and credible to be use as considerations for further expansion.

The smooth implementation of SAP Business One in PT Culletprima Setia is also because the close assistance from PT Soltius.

According to Ardiyanto, PT Soltius always provided the best service. “Each time we bumped into trouble, Soltius reacted quickly. There was always some issue, thus we keep a good communication with Soltius’ consultant. Every time we sent a report, we get the feedback the other day. Until now they still gives us the same service quality, nothing changed,” says Ardiyanto.

Ardiyanto adds that after experiencing the SAP Business One, he could tell that it’s top of the class ERP. “We feel the best benefit,” he says. 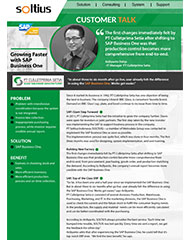