With SAP Business One that handles finance and administration process more efficient, F&B company Excelso could focus more on its cafes robust growth.

Despite the tight competition in food and beverage business, PT Excelso Multi Rasa (Excelso) has able to maintain its position as one of the major player in the industry. The company known by its brands: Excelso Café and de’Excelso, continue to show significant growth.
Affiliated with Kapal Api Group, the company was established in 1991 with their first store opened in the prestigious Plaza Indonesia, Jakarta. Since then Excelso has became one the famous café in the country. Recently, as café trends grows in Indonesia sparking more competitors from local and abroad, Excelso maintains well of its business.
Excelso’s 110 outlets can be found in every major cities in Indonesia, like Jakarta, Bandung, Semarang, Yogyakarta, Surabaya, Denpasar, Batam, Medan, Jayapura, and many more. To tap a larger market, Excelso develops a service concept that caters with each areas local potential and purchasing power.
Excelso has also been the pioneer in brewing local coffee in each of its outlets. Local coffee, like Civet Coffee, Kalosi Toraja, Kopi Lanang Toraja, Sumatra Mandheling, Java Estate, had long been listed on their menus. In servicing its customer, Excelso holds to its philosophy: “Serve with HEART, Give the BEST, Get Higher”. Giving the best service to the customer has been one of the company’s success keys.
Another success key that contributed to the success, says IT & Business Development Manager PT Excelso Multi Rasa Liechar Solihin, is the company’s management system that continuously improved and well organized, thanks to SAP Business One.
Before using the SAP Business One, Liechar remembers that until 2009 the company is still dealing with its book and performance report manually. “There was an accounting software practically for journal only, then we made report from it. The journals was gathered, manually processed, transferred to excel, then the report is made,” Liechar says. “There were a lot of pain at the time.”
One of the problem that came up was the data output was always late. Liechar says, the company’s financial report is scheduled to complete on the 15th in each month. “The reality is it was always late by a week or two, or even on the next month,” he says.
“It was really painful. We have the financial report, but the data validity was doubtful. Since it was created manually, human error was high. It was even difficult to know how many outlets we have at the time. The answer was never sure, sometimes 55, some say 57. Don’t imagine if we want to know how many of our customers are male or female, no body knows,” Liechar says.
Aside from that, the previous system was not fully integrated and required each outlets nation-wide to send their periodic report papers to the Head Office in Jakarta. “It was very difficult, not to mention if any papers like invoice were lost or got scattered,” says Liechar.
With such a messy system, Excelso business did not went stagnated. In fact it showed an outstanding growth of performance. But it cost a lot, Liechar says, especially in the human resources aspect.
“Each time we added another five outlets, we have to hire an admin person and another one for accounting. We divided the West and East region. For the west, office and the warehouse are located in Jakarta. And for the east, office and warehouse are located in Surabaya. It is a certain thing that turn over in human resources is very high. It is hard to find people, many have good capability but the price may not be right. Those with the right price may not have the quality,” says Liechar.

Turning to SAP Business One
In September 2009, Liechar went to visit Metrodata Solution Day in Jakarta. He was immediately interested with SAP Business One and PT SOLTIUS Indonesia, one of the SAP implementation partner in Indonesia that is also a subsidiary of Metrodata Group. “I saw the demo and as usual, I also look at its engine. I dug out deeper about the product and it seems to match with what we needed,” Liechar says.
He immediately made a presentation on SAP Business One to the Excelso board of director. “The board agreed, we have the same vision to made a transformation,” he adds.
Without taking too long of tender process, Excelso was directly assured to select SOLTIUS as SAP Business One implementation partner. “That time we bought 39 user licenses, it was a lot,” he says. But Liechar and the board know they needed it to improve the company performance.
The implementation process of SAP Business One in Excelso started in February 2010. During the first month, with guidance of the team from SOLTIUS, Excelso drew a detail of its IT blueprint management. “This blueprint is one of the success keys. We become aware of what we wanted, what our goals are, we stretch this to the detail and not just giving the big picture,” says Liechar.
After establishing the blueprint, next steps are the development, testing, entering opening balance and back-log process.
With various difficulty levels, opening balance for the existing 60 outlets was cleared in just five workdays. However, the hardest part is when the implementation team start to input the back-log files.
“We were trying to keep up with our data history. The input process for the back log is the one with the problem. Since we also doing the on going data we decide to give the back log to outsiders. We train them to do the entry, but it was not that easy,” Liechar admits.
The problem in the data entry was caused by confusion between the items, the goods and the conversion prochedures. “What is supposed to be gram became kilogram, that sort of things. Three days entering the data and I though none is useful and I decided to cut the process. Executive decision, back-log was stopped,” says Liechar.
The SAP Business One implementation was continued in March 2011. At the time the outlets had grown to 75. This time Liechar feels that the availability and the order of the data could support the implementation process. SOLTIUS is back in giving the support needed for the implementation.
The assistance process was very effective according to Liechar. “It was a hands-on process, so we immediately learned, we know how to deal with problems. With such strategy the implementation process gets faster,” he says.
The result: after three months of re-implementation, Excelso decided to fully convert to SAP Business One and leave out the previous manually management process. In 2012 SAP Business One entered the go-live status at Excelso. Almost all of the modules (Finance, Inventory, Purchasing, Sales, interface with POS) available in SAP Business One are used by Excelso. SAP is even deployed to each of the outlets.
The challenges that were given by the board to Liechar and team when they said to implement SAP Business One is successfully fulfilled. “In August 2012, we are all on time. We completed the finance report at the 12th, and send it to the group by the 15th, this goes till today,” Liechar says.

Instant and Accurate
There are plenty of benefits felt by Excelso after using SAP Business One. If previously it has to add another accounting and admin staff for each additional five outlets, now adding more stores does not necessarily have to be balanced by additional number of employees.
In addition, SAP Business One helps monitor the dynamics of each outlet. “It’s done instantly and accurate,” Liechar says. This is inline with the vision build by the company, so that the outlet management doesn’t lose their focus in giving the best service to customer.
“For Inventory stock, supply prediction, or any kind of things needed by an outlet could be analyzed here and be prepared,” he adds.
Liechar says that efficiency in human resources also occurred. This does not translate into decreasing the number of employees but instead giving them a more strategic role as internal auditor or controller. The result is that all data can now be reliable in terms of its accuracy and time.
Liechar admits he is satisfied with the services given by SOLTIUS, for him it was another critical success factor. “The delivery was excellent and so does during the blueprint,” says Liechar.
“Everything now is just a click away. If previously the report should be at the 15th, and actually completed in the 25th or 27th, now we have it ready on the 12th. Everyone’s happy,” Liechar says. Today, with the support of the current management system, Excelso has set a target to add 20 outlets a year.
“When everything is done manually, it was an imposible thing to do. Now, we could grow as we like,” Liechar smiles. 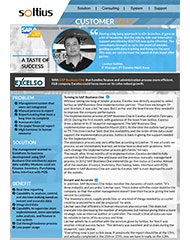