Aside from providing fast, precise, and effective solution, SAP provides the flexibility in adapting with the changes in human resources regulation.

Along with other companies in the group, PT Umas Jaya Agro Utama (UJA) and PT Bromelain Enxym (BE), GGP started to use the SAP Payroll system to help manage the company’s huge human resources, with over 23,000 workforces. SAP was chosen to replace the company’s previous payroll system that can no longer be reliable in meeting the latest requirements, especially with the new taxation system implemented by the government.

Established since 1979, GGP has grown to be the third largest pineapple producer in the world, producing canned pineapple and concentrate juice. GGP manages over 30,000 hectares of plantation area in Lampung, with most of its production goes for export.

GGP has five main divisions in its production line, which are Can Making, Drum Making, Cannery, Labeling, and Juice. From upstream to downstream, making it a leading integrated pineapple producer in terms of quality control, traceability of products, and environmental sustainability with well managed waste management system.

Meanwhile, GGP sister company UJA was established in 1990. The company produces high quality tapioca for food and beverage industry as well as pulp and paper in its plant in Lampung.

While, BE is a joint venture company between GGP and Belgium based company Enzybel International S.A. (Floridienne Group). The company produces proteolytic enzymes like papain, bromelain, and ficin. Bromelain is a digestive enzyme that could be found in pineapple juice and processed pineapple cane.

The company is also based in Lampung and started its operation in 2011 and exports its product to Europe, the U.S., and Asia Pacific markets. In 2013, the company produces 60 tons of bromelain, reflecting 21% of the world’s production.

Being among the leader in the business, the three companies are well aware of the importance of information technology support for their operational management system. That is why the company’s management decided to use the SAP Payroll to replace their old system.

“One of our consideration point in choosing the SAP Payroll is that the system can be integrated with the existing SAP system used by the company aside from its flexibility in meeting with the government regulation and the company’s growth strategy,” says Husin Kurnia, Agri Group IS & T Head. Husin adds that GGP has use almost all of the SAP modules and not just the payroll.

The shifting from the old system to the new one always needs adjustment, same thing happened when GGP started to implement the SAP Payroll. Mariyono says that in overall the implementation process went smoothly except for the employees’ data updating process, which took quite a time.

“Why it took such a long time? Because SAP could accommodate comprehensive employees’ data’s and there were lots of daily workforce that needs to be updated,” Mariyono explains.

However, Mariyono says, after all the data was uploaded into the system, everything gets easier, especially for reporting and controlling task.

“Compared with our old system, SAP is faster and more effective. Report is available without being asked, this makes is easier for us to make analysis,” says Mariyono.

At the company, there are two type of human resources, says Husin, permanent and contract based employees, all is uploaded to the SAP data base even though the turn over for the daily workforce is quite fast depending on the activity at the plantation. “With the data available in the SAP we easily and quickly able to get the cost for employees in each department and for each activity at the plantation and our plants,” says Husin.

Both Husin and Mariyono agrees that the success factor behind SAP implementation in the company is the commitment and full support from GGP’s management and HRD division to improve its HR management system to more advance, systematic, and real-time technology.

The SAP system is considered more proven and based on best practice HR system, especially when it comes to the flexibility in adopting new government regulation and long-term business development plan.

Husin says that before choosing SOLTIUS, the company invited several parties on a tender process based on scoring. There are three main considerations for the participants: pricing, capability of the consultant, and solution offered.

Capability of the consultant is very important for GGP. Thus in the tender process, each consultants were evaluated to see their understanding of the problem faced by GGP and the consultant were asked to provide workable solutions.

“We provide several cases and we asked them to give a demo of the solution they could offer,” says Mariyono. From three tender participants, SOLTIUS was seen to be the most capable in providing the best solution.

GGP also sees that SOLTIUS lead in terms of providing solution for HR, especially with its payroll system. Out of those, SOLTIUS was selected as implementation partner SAP Payroll at PT GGP, PT UJA, and PT BE.

It was the right decision to make, both Husin and Mariyono says that SOLTIUS performance and service is as expected. “After we went live, at the early months they still provide us with assistance,” says Mariyono.

Even after a year after the implementation, the good relationship with SOLTIUS and GGP remains. “SOLTIUS is willing to listen to our needs, and so do us. Both is willing to work together, because we trust that the consultant is giving the best,” says Mariyono. 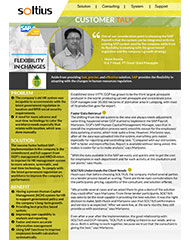