Being among the largest two-wheelers and four wheelers manufacturer, Honda Motor Company is also a well-known player in power products or multipurpose engines business. In Indonesia, this business is represented by PT Honda Power Products Indonesia (HPPI) as its sole distributor.

With the motto: “The power for life, smile for customer”, HPPI distributes Honda’s multipurpose engines to 111 dealers nation-wide. The products offered vary from water pumps, outboard engines, tillers, glasscutters, generator, and boat engines.
In Indonesia, HPPI started as a manufacturing company established in 1997. However, the manufacturing line was closed in 2006 due to changes in permit and the company turned into trading company. “We are planning to reopen our manufacturing business in the near future,” says Ave Lucyntha, Accounting Finance Manager at HPPI.

Upgrading to a new system
The company – with headquarter in Jl. Sultan Iskandar Muda, South Jakarta – has three warehouse, two in Jakarta and another in Surabaya. Different warehouse locations had created an issue for the company, as the IT system used did not support multi-warehouse business.

According to Apri Syam Halim from HPPI’s IT department, the company had been using accounting subsystem from logistic since 2007. This made the system to run independently and does not support many functions like consignment and return. “To improve the system functions, we had to spend a quite amount of money. In the end, as suggested by Global IT Direction we use ERP for our system,” Apri says.

Globally, Honda has IT Committee that annually meets in a forum. The meeting involved all Honda’s business lines, both in automotive and multipurpose engines. Apri says during the forum also conducts benchmarking on technology used to improve performance and business growth that leads to a conclusion for the companies to implement ERP system.

“Our IT team wanted to give the best solution to optimize business, which cannot be achieved when having a separate system. As the first step, we have to integrate the system. That is why we established a project team for the upgrade called unity,” Apri says.

Ave adds that with an integrated system the data will be consistent from the beginning till the end. There will be no deviation between one function with the others, so a report could be made correctly, accurate and orderly. This could make the company admin task easier and faster. “Integrated system will also strengthen interdivision coordination because each will know their portion in a business process. If a division disorder, it will affect others. So the system is keeping us in order and accurate,“ Ave says.

Choosing the proven solution
In 2013, HPPI decided to implement the ERP system with SAP ECC. The decision was made because SAP is the market leader and Honda Motor Company promotes SAP to its affiliated companies. HPPI was the first company in the power products business that adopts the SAP in the Asia-Oceania region.

The company decided to choose SAP based on three criteria. First, it is easily to be integrated with the Business Object Planning Consolidation (BOPC). Apri says that now the SAP is used to gather information from Honda’s companies all around the world, so it would be easier if HPPI implements the same system. “It will be our next project, meanwhile we are strengthening the core,” he says.

Second factor, the software should have upgrade function. During the software selection process, there were other packages that are more user friendly but it will took longer to upgrade its module. “User might be happy to use such system, but its future support is doubted. As in SAP, although there are difficulties in the beginning, it has end-to-end software maintenance function,” says Apri.

The third reason is taking the direction from Honda Motor Company to pick technology system with proven track record. This can be seen from the module comprehensiveness and how frequent changes happened. “There are other systems that frequently changed its technology in the modules, this kind of thing disturb our future business process,” says Apri.

Based on those three criteria, HPPI decided to pick SAP ECC. The company hopes to improve its sales and market with after SAP is running. SAP also helps HPPI to reach its end user faster and support inline reporting with Honda Motor Company’s BOPC. On the dealer management side, HPPI wants to make easier for dealer to interact and send order.

“One of our business development project in the near time is to open satellite office. There will be front-end sales in every major island and SAP implementation supports our plan since it can be accessed over the internet. We have tried the multi-warehouse connection and satisfied with the result,” Ave adds.

“Now we are using SAP for our consolidation report to Honda Motor Company. We used to take extra effort to input the report for having different system, it is easier now,” Apri says.

Mizusawa San, president director of HPPI says the above factors have been expected by the company when deciding to implement SAP. “We have a business strategy and IT is certainly an important factor. When we decided to use a certain IT system, it is indeed in line with our future goals,” says Mizusawa.

For Mizusawa, smooth business process is inevitable to tap business potential in Indonesia. Mizusawa says that multipurpose engine has a bright future in the country. “And it will last for a long time,” says Mizusawa.

Fastest Core Implementation
Apri said, "We are not familiar with SAP. It was so hard in the beginning talking about the technical installation to the business processes. Without the help from consultants, we were going nowhere and many user were distressed,” Apri says.

The IT team from Honda’s headquarter in Japan gave direct guidance when choosing PT SOLTIUS Indonesia (SOLTIUS) as implementation partner. One important criterio for choosing the implementer was consultants' track recored handling implementation in similar businesses.
“Our reference was Astra Honda Motor. It happens that SOLTIUS was handling some projects there. Aside from that, compared to other three competitors, SOLTIUS won in the points we consider critical, which are effective timing and efficient cost,” says Apri.

The project was started  in March 2014 and targeted to go live in six months. The IT team at headquarter was not sure about the offered tight schedule since there were only three people supporting. Tipically core implementation took a year to complete. “We can say that the core implementation process that took six months is the fastest in Honda. We are grateful to complete it on time, although we did all of those juggling in between many things,”

There were 30 users involved from the manager to staff, and this was the biggest challenge. With limited staffing, HPPI implementation team also need to handle the day-to-day routines. “So we have to manage our time and people for the implementation to go smoothly,” says Ave.

With a short timeline, Ave who was the project manager gave support to his team end encourage them to change, to adapt to the new system. “Aside from having the capability, they should also have commitment to try and be willing”. says Ave.

100% Satisfied
SAP integrates all the nuts and bolts needed for controlling information and report. “After sales reporting becomes more accurate and in the end customer satisfaction improved. We believe SAP will help us to improve our sales and stays ahead in the competion,” Ave says.

After completion of the core implementation, there are two more phases to be done by HPPI: to improve front-end sales (second phase) and reporting (third phase). The implementation partner for the next phases should pass the selection process. Hence, being our implementation partner in the first phase, of course SOLTIUS has an advantage “Besides knowing the system inside out and capable to customize the system, the track record is also quite sounding. Thus, in the next decision analysis, SOLTIUS has some plus points already,” says Apri.

In general, both Ave and Apri consider SOLTIUS had done a good job. With a complex user profile and limited implementation time, consultants from SOLTIUS gave their best support. HPPI appreciates SOLTIUS for giving a clear structured guidance, which can be easily followed by the end users. The president director also gives similar appreciation. Mizusawa saying he was surprised with SOLTIUS. Based on his long experience, IT consultant tends to offer products. “It happens anywhere, we are the target of tHeir marketing and sales. But with SOLTIUS, I am surprised, they are different,” says Mizusawa.

“We are 100 percent satisfied. We are satisfied and comfortable.” Mizusawa smiles. 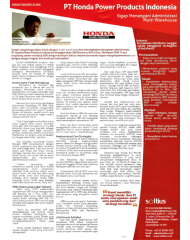