Despite its product is often used in many elite resorts in Bali or buildings with a tropical architecture design, for those outside the property or exterior design world, the name Viro might sound unfamiliar. Viro products are made of polyethylene or we commonly know as plastic. But to be specific Viro are made from HDPE plastic fiber with a high flexibility and tensile strength. Thus, Viro is capable to withstand heavy loads and doesn't easily tear or damage.

With the characteristic, Viro fiber is often used for household products that apply a weaving pattern, such as chair, shopping bag, food tray, fruit basket, laundry basket, etc. At a glimpse the product made with Viro synthetic rattan look very similar to natural rattan.

Other Viro product commonly used for exterior and decoration is synthetic straw. The application of the product is easily seen in several high-end resorts in Bali for their villa thatch. Viro’s thatch has a very natural look, thus several resort in Maldives and Qatar has also been using the product, including other public places such as zoos in Cincinnati, San Diego, Fresno, and Prague. Disneyland in Orlando, an ocean theme park in China, and expo hall in Milan is also using the product to bring in tropical ambiance.

How Viro, a made in Indonesia brand, could be so successful expanding to international market? The story goes long back to 1985 when the couple, Jong Oe Miauw and Kheng Tjin Pin, established PT Polymindo Permata. The company begins with producing simple products made of plastic like candy stick, drinking straw, tubes, and water hose. And later because the company is able to meet industrial standard, it began to gain trust to supply hose for several manufacturing and automotive companies.

The idea to create Viro came up in 2000. The product is a breakthrough in the furniture industry as it provides a good alternative for material with strength and superior endurance. Viro is an all-weather plastic fiber material designed and engineered for outdoor use. It has a long lifetime and durability because Viro is made from quality raw material and went through years of rigid weather and UV radiation tests. As an alternative for rattan, Viro offers the same beautiful finishing and comfort. Later Viro established Viroforms, a division that produces household products. Aside from its durability, Viroforms product is also non-toxic.

Then in 2008, PT Polymindo Permata established another division called Virobuild to develop the product further. The result is new innovation of synthetic thatch called Virothatch that gets a warm welcome from resort builders. The thatch replaces a conventional thatch and has a longer durability yet environmental friendly.

The First to Use SAP Business One

To keep up with the fast growing business, the company founders had prepared the adequate infrastructure and support system from a solid workforce to a computerized system that supervise the workflow and production. However, in the early days of producing Viro the company found a problem in the computer program used to deal with the work. The Macola accounting program that had been used by the company since 1990’s began experiencing problem when dealing with complex work. The program can no longer accommodate purchasing process, production, etc that gets more load each day.

The problem raised the possibility of human error related with transactions that keep increasing, also difficulties in real-time control and supervision. There was no integration between product master data and production process because the system search function was still manual, runs slowly, inaccurate, and might cause human error.

“Miscalculation could occur if the process is not integrated. There is a possibility to cheat and room for argument that could cause high-cost economy. Financial report book making could also take longer and delays decision-making process,” says Jong Oe Miauw, the founder and owner of the company who is mostly known as Pak Yunus.

Due to those significant reasons, in 2004 Pak Yunus decided to replace the Macola accounting program. Finding a replacement wasn’t difficult. Pak Yunus happens to be an avid technology observer and heard about ERP program called SAP. And after studying it briefly he decided to use SAP program in his company.

“The ERP I choose is the best one in the world. SAP is the market leader in ERP. It has ERP for small business and medium business, the SAP Business One, that can be quickly implemented in our company,” Pak Yunus explains oh his decision to use SAP Business One.

It was the right decision, the company that is based in Tangerang began experiencing improvement in employees working ethos after the SAP Business One goes live. Inter division working process is now faster and accurate because of the system online and real-time feature. But has to be admitted that it was tought in the beginning. To implement SAP Business One that consist of Sales, Financial, Purchasing, Banking, Inventory, and Production modules, employees has to work extra and working pattern changed. Employees are required to be very discipline in data input, assuring it’s complete and detail than usual. All has to be on time as well.

The trainings held regularly eventually shape the mindset and motivate employees to work consistently and continuously with the system. Moreover they understand that the work they are doing is shared and used by other division online and real-time.

“Optimizing the SAP Business One to support the company operation to achieve its target is the problem we have to solve after the system was implemented. SOLTIUS was very helpful in giving solution or providing adjustment we needed. At it keeps going till now. I am very satisfied to work with SOLTIUS,” says Pak Yunus.

PT. Polymindo Permata now rely on SAP Business One to accommodate the fast changing global market demand. SAP Business One is seen more than just a program that smoothen and ease the company to achieve its best performance, it is also becoming a source of reference to decide strategic policy the company will take and to meet with the company’s future development and expansion.

“We hope that SAP Business One has the flexibility to adapt with changes in business. With its real-time feature we hope SAP Business One could provide a faster and accurate monitoring, book building and costing, so we could make the right decision and action,” says Pak Yunus. 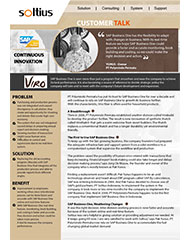