PT Tigaraksa Satria Tbk is the first in the region to upgrade its system to SAP ECC 6.0 on HANA for a faster business growth

Technology has been one of the critical growth factor for PT Tigaraksa Satria Tbk (TRS). The company’s management has been relying on technology, in this case, the SAP version R/3 4.7. Since 2004 was the core system to support its nation-wide sales and distribution of consumer goods.

Technology has driven the company’s business so fast. Lately TRS feels that an upgrade to the existing technology system is needed to keep up with the growth.

“We needed a new and a more advanced system to manage and store our huge data,” Heri Gunawan, Solution Manager for the SAP ECC 6.0 on HANA at TRS, says. TRS management knows that the SAP R/3 4.7 is no longer maintained by SAP.

An upgrading IT system to keep the business ahead of the curve is crucial for a big company like TRS. Established in 1919, TRS originated from a family business in trading. In 1986, TRS became a separate entity from its holding and specialized in the business as it is today. “Currently, there are 14 principals we are working in food, home and body care, and non-baby food,” says Niken H. Chandrawati, Legal & Corporate Affairs Manager of TRS.

TRS distributes its principal’s products to practically every supermarket and hypermarket in Indonesia. TRS has 32 branches nation-wide, along with its 30 warehouses.

TRS business fully commenced in 1988 and on April 1990 it listed its shares at the Jakarta Stock Exchange and Surabaya Stock Exchange. Aside from distribution, TRS also manages three other business units: educational product run by Educational Product division, household LPG and kitchen appliances under PT Blue Gas Indonesia, and production and packaging services for milk powder manages by Manufacturing Services division. The company is supported by 2,000 employees, including those working in its business units.

Making Big Data Simple
For a company with such a huge business scale, maintaining its principal’s trust is very important for TRS. It is proven with TRS achievement in obtaining ISO 9001:2008 and Hazard Analysis Critical Control Point (HACCP) that relates with high quality control and food security for its production unit in Yogyakarta. The certification is given by PT SGS Indonesia, an audit and certification institution affiliated with International United Kingdom Accreditation Services (UKAS) and ANSI-ASQ National Accreditation Board (ANAB).

Aside from that, TRS assures that all its business process is running well by applying an integrated operation system at the company. Before using SAP, TRS used Tolas, which was no longer developed since 2004. Lianne Widjaja, who was the procurement project manager for the company’s integrated system, and her team decided to choose the SAP R/3 4.7 to replace Tolas. Lianne now sits as President Director at TRS.

In terms of the system, Heri Gunawan says, Tolas and SAP is not much different, as both are integrated system. It is only how to use it that makes a difference. TRS implemented nine SAP R/3 4.7 modules, which are Material Management (MM), Warehouse Management (WM), Production Planning (PP), Quality Management (QM), Sales & Distribution (SD), Financial Accounting (FI), Controlling (CO), Plant Maintenance (PM), and Human Resources Management (HR).

Yet now the company has decided to upgrade to SAP ECC 6.0 on HANA. “Why we stick to SAP? SAP is a proven real-time solution and integrated system that has been supporting our company in business,” explains Nelly, Project Manager SAP ECC 6.0 on HANA and also Head of Internal Audit at TRS.

TRS uses seven modules of SAP ECC 6.0 on HANA, instead of nine in the previous vesion: PP, QM, MM, WM, SD, FI, and CO. There is no specific reason behind the modules selection instead it is based on the company’s needs.

“Why we picked High Performance Analytics Appliance (HANA)? Because it’s SAP’s. We hope that integration between HANA’s database and SAP system can be improved[VWS1] ,” Nelly says. Furthermore the data is compressed, which can’t be done by other databases. HANA is also able to manage data faster, no matter the size is.

Brings Comfort to the Principals
For TRS, implementing the SAP ECC 6.0 on HANA is certainly an achievement. TRS is the first company in Asia Pacific and Japan region using HANA. Thus boosting the company’s prestige. A company that uses SAP, especially its newest version, shows that it has a sound business and solid financial. This reassures principals’ trust to TRS.

SAP ECC 6.0 on HANA is also proven to provide highly integrated and real-time process, then making the work process seamless, easier, faster for its 500 users. It gives high impact to improve interaction with principals. Shipment request for certain products from an outlet can be dealt with a click away. The process is just faster and real-time.

To get to the integrated service level, TRS did more than just upgrading SAP but also upgrading its Business Warehouse (BW) to improve its data analytic capablity. TRS migrated from BW version 3.5 (Infocube, DSO, InfoObject, Query) to BW version 7.4 on HANA. The initial scope was to migrate 20 cubes only, in the end the entire cubes were successfully migrated.

All the users, Nelly says, were very happy using BW 7.4 on HANA in comparison to the previous version. Report processing is way faster. The combination of SAP ECC 6.0 on HANA and BW 7.4 on HANA Heri says. “… like driving at top gear and the speed is quite stable,” Heri says.

BW is SAP’s business intelligence solution for analytics and reporting.

Choosing SOLTIUS
In the implementation process of SAP ECC 6.0 on HANA, TRS was guided by PT SOLTIUS Indonesia (SOLTIUS), a subsidiary of Metrodata Group. SOLTIUS was carefully selected as implementation partner. “We compare several companies. We have high criteria in choosing the best,” Nelly says. The criteria include reputation, technical aspect, human resources, pricing and after sales service. The selection process took 3-4 months.

SOLTIUS was able to meet all standards set by TRS and achieved the highest score among others. SOLTIUS added value compared to others, according to Heri, is its capability in implementing the system according to the blue print. A mismatch between the blue print and the implementation will ruin the whole project. “A slight modification can still be tolerated, but if things constantly changing that could be dangerous,” Heri explains.

“We did request to make the the timeline shorter. We were expecting it can be done in four months, SOLTIUS proposed 6 months, but then we did it in five months. One month earlier than the plan,” says Nelly.

The project itself is a great achievement that Tigaraksa preserves their commitment to their motto “Always Ahead”.

Despite the fact of having a capable implementation partner, we still encountered several challenges. Nelly says, firstly is how to build a strong team to ensure the project schedule can be achieved. After a long discussion and trial and error, we can beat that challenge by having some team building meetings to make the team having the same vision, way of doing project and positive environment to support each other.

The second challenge was bugs findings. This issue made the realization phase was being dragged a little bit in April 2015. Yet, TRS and SOLTIUS solved the issue through a well cooperation process in the project.

All of the challenges were addressed one by one both by TRS and SOLTIUS. Herry says, even that state if the art system and improvement in the company’s sales doesn’t really connect to each other, he believes that the new system will boost TRS performance to become one of the country’s leading companies. 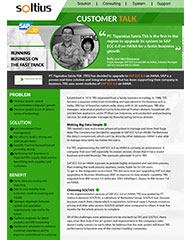