With more than 20 years of experience in the industry, PT Topla Abadi Jaya is one of the leading companies in electronic and automotive components. The company produces quality products like Injection Molding Machinery, Plastic Automotive, Plastic Compound, Plastic Sheet, Roller, Vacuum Forming, and other plastic products for electronic and automotive manufacturing company in Indonesia.

PT Topla is part of the RP Topla Group, a Japanese based manufacturing company. Beside Indonesia, RP Topla Group production bases are located in Malaysia, Vietnam and Thailand. In Indonesia, PT Topla office and factory is located in MM2100 industrial estate in Cikarang, Bekasi, West Java.

As one of the major player in the plastic sheet industry for electronic and automotive, PT Topla applies modern management principles commonly applied by Japanese. The high quality products it produces is part of PT Topla’s vision to make high quality products that able to compete in the global market, which the company able to prove. In the regional market in Southeast Asia, before RP Topla Group set their foot in Malaysia and Vietnam, it was PT Topla that supplied the plastic sheet needed by electronic and automotive manufacturers in ASEAN countries like Myanmar, Malaysia, Vietnam, and the Philippines.

“Now we are more focus on the domestic market,” says Suparno, Senior Manager for Finance & Accounting PT Topla. This focus is also part of the RP Topla Group global strategy.

It is certainly not easy to ensure business to run well and smooth. It takes the commitment from the entire company management to turn the company’s wheel properly. One of the significant factors is by using Information Technology as business enabler for the company. And PT Topla is fully aware of that.

Long-term engagement with IT

Suparno explains that PT Topla has a good perspective in using IT. Almost all the managerial process involves IT. Each of the company’s department such as Marketing, Finance & Accounting, Production Engineering, Quality Control, Purchasing & Delivery, General Affair, and production, is connected to each other with the existing IT system.

At the Finance & Accounting department led by Suparno, for example, all the financial processes and recording is done with IT, since the era of the Lotus 123 to Microsoft Excel. Before SAP Business One is implemented, PT Topla used the Microsoft Excel for its financial report and accounting.

“It was a challenge before we use the SAP,” says Suparno. Suparno explains that RP Topla had established a fixed reporting system for each of its business entity in every country. One of the fixed reporting procedures is having financial report and accounting system using the Microsoft Excel system.

“We have the Excel formulas we design as detail as possible. With the formulas we create the balance sheet by entering the data’s. So, despite it’s done manually we are still able to handle the task,” Suparno explains.

As a manufacturing company, business process isn’t simple. For example, each goods that came in and out should be given a receipt distributed to related units like the Purchasing, Accounting, or Inventory, and later to the finance that produces a record such as invoice.

With the SAP Business One, the stages are not much different but it takes shorter time. If goods came in, for example, The inventory people will simply input the item and the data needed is ready.

“Our works become easier. In the sales process, once we received an invoice we immediately required to input the data. After adopting the SAP Business One, this is done automatically to the journal. Accounting process gets simpler, we just need to control the validity. Same thing for the purchasing side, we just need to follow the data processing and marketing. Simply monitor the data that came in and enter the system and verify if there’s a mismatch. Controlling process also gets easier. Accounting steps are shorter both in the sales and purchasing,” says Suparno.

Similar effect happens for the financial report. Despite having to use the Excel format when reporting to the holding company, Suparno says that SAP is capable of making the Excel report simple. “All we need is to export the SAP data to the Excel and process it according to what the management needed,” Suparno explains.

With the SAP, Suparno says that the data reliability became increasingly improved, which is different when before the SAP is used. At the time data’s weren’t available in real time. “There were a case where the record showed there are 500 items available in the storage, which turned out to be false because the report was not actual. With SAP business one this kind of thing wouldn’t have happened,” says Suparno.

With improved data reliability, PT Topla is very optimistic to grow further and to be among the best player in the business. The target set by the company such as improving profit margin and cut losses could easily met. In the near time the company even planned to buy new machines to boost production capacity.

There are four SAP Business One modules adopted by PT Topla, which are sales, purchasing, inventory and finance. The implementation program was fast and without any problems. “It took 40 days for the implementation process and we went live in April 2014,” Suparno says.

Yet, there were several challenges that have to be addressed during the implementation. One of the main challenges was nontechnical issue. “Which is to convince user already comfortable with the previous system to move to the new system,” Suparno adds. The challenge was well addressed by the company. Gradually, the company convinces the users on the benefit brought by SAP Business One.

“We did an intensive talks with the user, which took almost two months. We told them that it might be hard in the beginning because maybe SAP Business One is a new thing for them. But once they can get use to it and become familiar with the new system, SAP Business One will make their work easier,” says Suparno.

During SAP Business One implementation process, PT Topla was guided by PT SOLTIUS Indonesia, one of Metrodata Group subsidiary. The partnership process started from the cooperation between SOLTIUS with TIS Inc, one of the Japanese based IT Holding Groups entity.

To grab a bigger market in Indonesia, TIS Inc. decided to cooperate with local companies like SOLTIUS, which is considered more strategic by Masa. Among TIS Inc. efforts in tapping Indonesian market is by introducing the company to the headquarters of the Japanese companies operating in Indonesia. Once the relationship is built, TIS Inc and SOLTIUS cooperate with the companies’ entity in Indonesia. “So we established Japan to Japan relationship first to give this Japan companies feel comfortable working with TIS Inc.,” Masa explains.

SOLTIUS was appointed as a partner in this cooperation based on several criteria. Masa says that TIS Inc. considers that SOLTIUS is the right partner to market IT solution for Japanese companies in Indonesia. “We received many recommendation saying SOLTIUS gives the best service in Indonesia,” says Masa.

PT Topla felt the same satisfaction working with SOLTIUS. Suparno mentions that during the implementation process SOLTIUS was very helpful.

“SOLTIUS gave the best assistance and was very communicative. They know our needs and willing to listen. Anything that our management wants was fulfilled. When the implementation is done and the system went live, SOLTIUS remain to give guidance. Anytime we face problem, SOLTIUS is always easy to contact and available,” says Suparno. 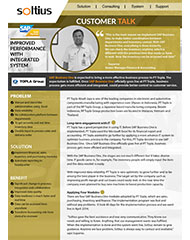