Those who like coffee should be familiar with civet coffee. As a type of coffee and a name of a processed coffee, civet coffee stands on a different level. Civet coffee has become many coffee drinkers favorite around the world for its unique flavor.

Originated from selected coffee beans harvested from plantations in Sumatera and Java, PT Java Prima Abadi has successfully made civet coffee as a one of the highest priced coffee in the world, in line with the company slogan: “The most expensive coffee in the world”.

System that could integrate the entire business units

Jeff explains that since the company was a home industry, PT Java Prima Abadi’s IT system was a very simple one. Jeff who is also the next generation of the company’s founder remembers that the company’s management system was built on their own.

“We make our own system,” Jeff says.

PT Java Prima Abadi started to adopt the IT system by using Excel program. With the program support the company gets the confidence to expand the market, especially international markets. Production was ramped up to meet with the growing demand. New product variants were developed.

As PT Java Prima Abadi becomes more aggressive in its business, more workload had to be settled. All went well, but there was a problem that the company was facing, the previous IT system was no longer can be relied on as business enabler.

“We understand that the system we used can no longer accommodate our needs,” Jeff says.

The system he meant is the self-developed system the company made. The simple system based on Excell program can no longer cope with the growing and expansive business needs. Especially to give accurate and fast information related with the production of each of the company’s units.

The main factor that caused the inefficiency and ineffectiveness of the company’s IT system is that each system was not integrated. There for user often having difficulties to look for product data’s, especially the ones related with distribution.

“We cannot have full control of the company’s business process. There were no real-time reporting because the system was not integrated to the entire department,” Jeff explains.

In the end, the company has to make an urgent decision. The company’s IT system should be replaced with a new and sophisticated system.

Since 2015, PT Java Prima Abadi had tried three different IT systems for business management. A local vendor in Semarang develops all of the system.

However, all the systems made by these local vendors cannot sustain long enough. Thus, PT Java Prima Abadi had consistently looked for new vendor to make them a new system.

“We want to upgrade our system but our previous program cannot be updated with the needs of the new program. Thus, we are forced to replace the system because we have the needs. As the company grow, we need a better system,” Jeff says.

With several failures with the local vendor, in 2015, PT Java Prima Abadi decided to look for a true reliable system and this time they used an international standard to make sure they get what they want. This requirement is compulsory because the brand Kopi Luwak products has already been exported, which now there is a need of a data management system that is fast and accurate.

The selection process for the new system was not that difficult. After years of using local-sourced system, Jeff has kept an eye on a business solution system named SAP. He often gathers the information about SAP by visiting computer exhibitions or by asking his business partner that has used the system. Early information about SAP already made him impressed.

In mid-2015, PT Java Prima Abadi decided to adopt the SAP Business One. And PT SOLTIUS Indonesia (SOLTIUS) as part of the Metrodata Group, was chosen as the implementation partner.

Jeff says the decision to partner with SOLTIUS is more than because the company is SAP Certified Gold Partner. More than that, since the tender process, SOLTIUS seems to be very well knowledge about SAP products more than any other participants. Three big companies is business solution management service participated in the tender.

“The most important criteria are in the consultancy skill. We can easily talk with SOLTIUS and the people are more credible. Besides, we get references from other companies using the SAP and after comparing we decided to partner with SOLTIUS for the SAP Business One,” says Jeff.

The premium service given by SOLTIUS to PT Java Prima Abadi during the SAP Business One implementation was a critical point, especially in addressing the challenges.

The implementation process took six months. And Jeff remembers that the process was not easy. Several users that has been familiar with the previous system were experiencing difficulties in adapting with the SAP Business One. But with the right approach, in the end all of the users gave their support to the SAP to support their work process.

Many improvement expected by the company have begun to appear after the SAP Business One go live in April 2016. System integration between units has enable faster, accurate and detailed information. This instant information saves time and cost, as well as give the best perspective to help fast and accurate decision-making. SAP Business one is also easy to operate and the screen interface is understandable.

The SAP Business One modules used by the company with over a thousand employees are: Production, Finance, Marketing, Management, to Warehouse module. The most significant improvement is on the finance division, according to Jeff. With the system, vendor can easily create invoice list, which will be processed automatically by SAP to payment document. SAP Business One is also integrated with vendor system to prevent double input and faster data processing. After the SAP Business One go live, there is no such thing as off schedule report.

The imminent problem on the previous system of losing data was no longer existed. This was a serious problem that arises on a mere issue like electricity cut off, which caused the previous system to go down and led to data loss and corrupt. This problem would surely never occurred again after PT Java Prima Abadi adopts the SAP Business One.

“After using SAP, all problems are through,” Jeff closes. 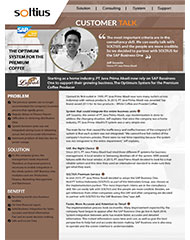